I’m slightly more than halfway through the my last semester in Le Cordon Bleu- 5 weeks have completely flown by and I haven’t taken the time to truly reflect on my entire time here in Paris, hence, the purpose of this post.

The superior exams are different from the basic and intermediate level. Rather than recreating a dish that we have already done previously, the goal now is to create and compose your own dish, working within a list of ingredients, which should be a culmination of all that one has learnt in the past 7 months. Leading up to the exam, we were given two workshops (aka ateliers) where we were given a different set of ingredients, and had to prepare a plat and an entree with 5 hours. Initially, I was 100% excited about being able to do something of my own, showcasing what I have taken away from my time in school. But as I started planning my dishes (within the constraints of having to use certain ingredients and only certain amounts of it, and having to create specific garnishes like a flan, gratin, turned vegetables, etc..), I couldn’t make up my mind on what was best to do. My initial ideas were not at all french, or what was my understanding of french food at least. I wanted to do so many things, on top of what was already expected, just to show case what I could do. I wanted a salad atop my fish atop the fried garnish that I already had, with a jus and a puree and a mash and a sauce…

How do you come to a final decision when I personally had so many criterias; create a sophisticated dish, that would still be manageable to execute, that was balanced at the same time, had all the components required, and most importantly, would be something I personally enjoyed eating.

Overall, I was satisfied with my dishes. Throughout the practical, I kept trying to add more components to the dish (for no reason) and only realized at the end that they did not complement the dish, did nothing other than take up more space on the plate and masking other components at the same time. I wasn’t late to serve, but I wasn’t as organized as I imagined myself to be. I had 20 different bowls in the fridge, 7 different pots on the stove and on the racks above the stove, trays everywhere, spoons and knives in different bowls everywhere. Basically, a big fat mess. I keep telling myself to be more disciplined with my cleaning and my organization, take something, put it back to the original place after using, etc etc. But it’s so easy to fall back into the habit of juuuust concentrating on your food and your dish and the cooking, that you neglect the rest and end up cooking in an area that looks like a tornado had just come through, which really does not reflect well on you as a cook. 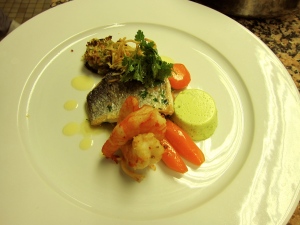 What exactly is french food, though? I’ve been a little cynical about french food recently, ironic because I am in a culinary school that specializes on french cuisine. My initial reasons for choosing LCB over any other culinary school was precisely the focus on french cuisine. The techniques, the discipline, the sophistication. But along the way, I became slightly disillusioned with the idea of french food, mainly because my development of the concept of french cuisine came directly from the recipes we were working on in school. Some of which were not good to eat, or were overly complicated for no reason, or seemed to focus too much on the aesthetics rather than the flavors. When the recent trend in the F&B scene seems to be a focus on fresh, simple foods, not overly played or toyed with, french cuisine seems to be just the opposite of that, and hence, not as appealing.
But after really giving it some good thought, I’ve come to a personal epiphany of sorts. Food trends come and go, but the base techniques of french cuisine is far superior to any other cuisine I can think of, IMHO. When the techniques are executed with enough respect, discipline and finesse, the results can be pretty mindblowing. School has given me a whole range of techniques and exposure to different dishes that are not commonly or no longer served, because they are either too time consuming to make (i.e the potato scaled red mullet dish from Paul Bocuse), or they just don’t hold the same appeal as they used to 50 years ago. It is my responsibility to take away the important lessons from each recipe. One can’t expect the chef to spell out exactly what you are to learn from each dish, or each practical. Each practical is a practice, to better filet a fish, to better cook a piece of meat, to better turn a vegetable, etc. And instead of just going through it mindlessly, only looking towards the end, I need to really hone in my focus and concentrate on that task at hand, give it enough respect and time that each component of the dish so deserves. A dish treated with respect in the kitchen will definitely show itself visually on the plate, and also on the palate.